The collapse of the Rana Plaza factory building in Bangladesh was the worst ever industrial incident to hit the garment industry. It was followed by a struggle for justice for the Rana Plaza workers and safe factories for all.

“They tried to pull the concrete plates that were on top of us. From both side of the plates people were pulling me and they managed to get me out. The weight of the concrete had pulled my uterus. At 11pm they removed my uterus completely. I need medical treatment and I have dreams for my child, so I need to earn money. The tuition fees might be low, but all the materials you need to buy, like shoes, books, uniform and the exam money comes on top of this.” 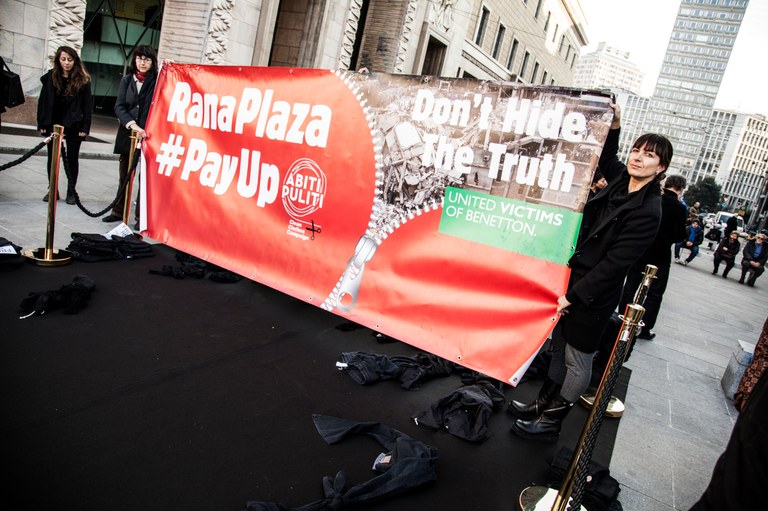 Rana Plaza, the collapsed eight-story commercial building located in Dhaka's outskirt Savar, which housed several shops, a bank and garment factories, is the painful symbol of the grave tragedy encountered by garment workers.

On 24 April 2013, the Rana Plaza building came crashing down, killing 1,134 people and leaving thousands more injured. People all across the world looked on in shock and horror as media reports poured in revealing the true extent of the human toll. There were harrowing stories of survival, of people who had no choice but to amputate their own limbs in order to be freed from the rubble and survive.

On 23 April 2013 large structural cracks were discovered in the Rana Plaza building. The shops and the bank on the lower floors immediately closed. But warnings to avoid using the building after the cracks appeared were ignored by the garment factory owners on the upper floors.

Garment workers were ordered to return to work the following day. Due to management pressure, on Wednesday 24 April thousands of workers went to work again at their garment factories located in the cracked Rana Plaza building.

Only hours later the entire building collapsed. Including rescue workers, 1,134 workers were killed. Nearly 2600 workers were injured, many of them for the rest of their life. Many of the survivors had been trapped under tons of rubble and machinery for hours or even days before they could be rescued, sometimes only by amputating limbs.

This gruesome tragedy has devastated the lives of thousands of workers and of the families of the deceased and injured. Their sufferings are horrific and required immediate and long-term medical care and compensation. 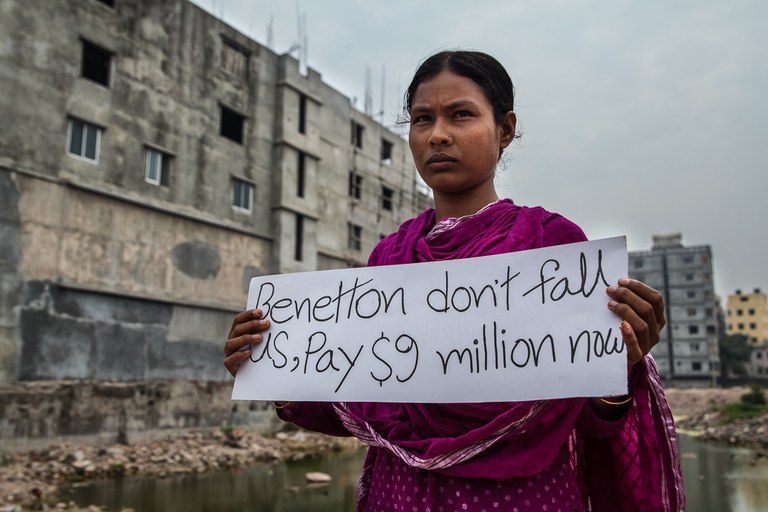 What did we do?

Immediately after the collapse we helped realize the creation of the Accord on Fire and Building Safety in Bangladesh in May 2013 and campaigned for brands to sign on. It was subsequently signed by over 200 companies. The Rana Plaza Arrangement was created afterwards to coordinate compensation for the affected families.

No amount of money can make up for the loss of a loved one or the resulting physical and emotional scars inflicted on those who survived such a tragedy. But what is also true is that the survivors and victims’ families should be compensated for the financial and medical losses they sustained as a direct result of the disaster.

Each of these brands was a complicit participant in the creation of an environment that ultimately led to the deaths and maiming of thousands of individuals. Calculations based on International Labour Organisation convention 121 showed that the families of those affected by the Rana Plaza collapse are owed $30 million in compensation.

We campaigned for over two years to make brands take their responsibility and pay into the trust fund or increase their contribution if their first payment was insufficient.

We collected over 1 million signatures to make Benetton pay up an appropriate amount. There was irrefutable evidence exposing their direct link to Rana Plaza – photographs of the Benetton labels in the building rubble, and documentation of order forms from the New Wave Factory in the Rana Plaza building.

Following initial denials from the company in regard to their link to Rana Plaza, they later publicly acknowledged that New Wave Style was a supplier for Benetton. The fact that brands like Benetton kept dragging their feet only prolonged the suffering of the workers impacted by Rana Plaza. Some brands linked to the disaster even never paid up.

The collapse of Rana Plaza brought worldwide attention to deathtrap workplaces within the garment industry.

The public interest and media attention has resulted in more political pressure than ever before to effect change and has led to significant ground-breaking approaches to prevention and remedy, with the establishment of the binding Accord on Fire and Building Safety in Bangladesh and the Rana Plaza Arrangement involving all major stakeholders, meant to compensate the survivors and the families of the killed workers.

The Arrangement is an unprecedented coordinated approach to ensure all those who have suffered due to the collapse will receive payments to cover loss of income and medical costs.

Only after more than two years after the disaster and some vigorous campaigning could the last reluctant brands, such as Benetton, be convinced to pay an appropriate amount into the fund and was the target of $30 million compensation reached. This meant that the compensation process could finally begin. The full list of donors to the arrangement can be found on the website of the trust fund.

The immense difficulty in establishing which brands produced at Rana Plaza sparked an intense movement to create more transparency in the garment industry.

You can read more in our 2013 report Still Waiting, looking at the lack of compensation paid to victims of Rana Plaza and Tazreen Fashions. More information on the process can be found in this University of Sussex report from 2018.

Every year since the Rana Plaza collapse we launched updates on the situation of the Rana Plaza workers and workers in Bangladesh in general. Find these updates under resources.

A lot of media outlets paid extensive attention to the collapse, for example