Help us reach one million signatures from EU citizens calling for the payment of a #LivingWage as standard in the supply chains of all garment products sold in Europe! Every voice counts, even those outside of the EU.

We call upon the European Commission to introduce legislation requiring that brands importing their products into the European market conduct specific due diligence in their supply chain to ensure workers are paid living wages.

Want to add your voice to our call? Sign the petition here!﻿

What is the problem?

Sweatshops and sweatshop wages are not something from the past. In fact, there are clear indicators that the purchasing power of workers, the majority of them women and a significant proportion of them migrants, has declined over the past decade. The race to the bottom tirelessly continues with brands ever looking for any place cheaper and anything faster. Ultra fast fashion is the norm and again it’s the workers who are paying the price.

Minimum wages have fallen short of keeping up inflation, rising cost of living and have actually never been a good reflection of labour that goes into manufacturing a garment. Garment brands and retailers wrongly use minimum wage levels in production countries to argue they are not violating any laws and denying any responsibility for the fact that what workers are earning is barely enough to support workers and their families. But a minimum wage is not a living wage, especially not in countries competing with other countries to attract orders from international companies. In Asia, the average gap between what workers are currently earning and what they should be earning is a factor 3, meaning workers’ wages would have to triple in order for them to be able to support themselves and their families. In most European production countries there either is no minimum wage, or the minimum wage level is closer to the poverty line than to what an estimated living wage for the area is. The same goes for production countries in Central America or Africa. Garment companies claim to at least provide jobs and with that a stepping stone out of poverty, but the reality is that a job in the garment industry often means being trapped in a cycle of poverty with never ending loans, debts and immediate crisis in times of unexpected events, like the covid-19 pandemic.

Fair tripartite minimum wage setting happens almost in no production country. Civic space and the power of unions are under serious threat in many production countries, causing biased negotiations in the favour of employers – whose main interest is maintaining or increasing the amount of international clients they have. The lack of binding mechanisms is combination with the enormous threat against workers organising makes it clear that garment workers are facing a future that is no better than their current situation. With brands not being held to account and with governments that are mainly interested in attracting foreign investment, the future is not looking bright. Voluntary initiatives and brands’ corporate social responsibility efforts have not led to any meaningful change in workers’ wages and are in fact distracting from the simple fact that a higher price needs to be paid for labour and that this price needs to be paid by garment companies: the ones profiting most from the intensive labour of workers at the bottom of their supply chains. In the current international arena it is too easy for brands to evade any responsibility for how much workers are being paid. The proposal for legislation at the European level is a first step in the right direction. If the proposal gets approved and adopted, it would make it seriously harder for brands to ignore the issue of living wages.

Workers in the garment industry have been structurally underpaid for decades. Despite some efforts by industry stakeholders and commitments by progressive companies, the industry overall has not made progress on the issue of living wages. In fact, in some production countries workers have seen their purchasing power decline over the last couple of years. Prevailing low wages and products with prices that do not reflect the true cost of labour has meant workers are unable to generate savings, making them vulnerable to unforeseen events, like the COVID-19 pandemic. Now more than ever, consumers and governments are aware of the fragility of workers’ livelihoods and the insecurity of poverty wages. Paying living wages benefits brands and workers alike - through increased quality of life, improved health of workers and heightened morale.

Clean Clothes Campaigns believes that ultimately brands and retailers are responsible for making sure that workers in their supply chains are able to live a decent live and enjoy human rights. The right to a living wage namely is a human right. The UN Guiding Principles for Business and Human Rights also clearly states that where states fail to protect citizens from human rights violations, companies have the obligation to do so and not exploit that failure.

Brands and retailers are currently benefiting from the lack of a legislative framework that protects workers’ wages. This ECI is a call upon the EU as a policy-maker to address this legislative gap and make it harder for brands to evade their responsibilities. We need 1 million signatures from EU citizens in order for this proposal to succeed, so we’re also asking you to act – if you can – and sign our petition here. 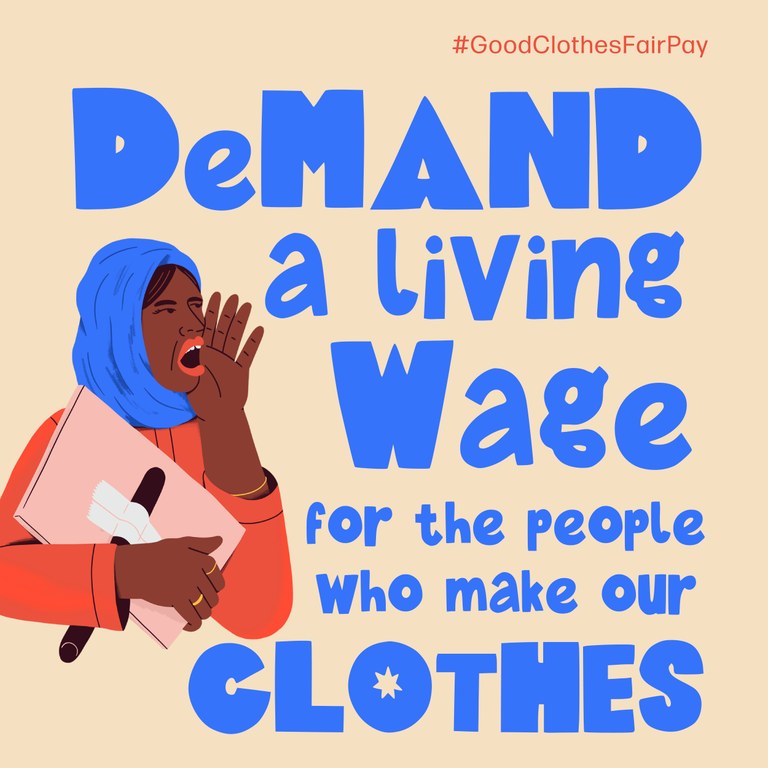 The Good Clothes, Fair Pay campaign is ties to a European Citizen’s Initiative (ECI). An ECI is a unique European Union mechanism aimed at increasing direct democracy by enabling EU citizens to participate directly in the development of EU policies. It enables EU citizens to call directly on the European Commission to propose a directive or regulation, provided they are able to present 1 million signatures from citizens from at least one quarter of the member states (7 countries).

Good Clothes, Fair Pay is a joint campaign by several large players in the global garment industry and together we are trying to collect 1 million signatures from EU citizens within exactly one year. Payment of living wages has been a priority for workers and unions for more than a decade but it seems as if nothing has changed despite numerous different voluntary initiatives. Clean Clothes Campaign believes that voluntary, corporate social responsibility will not result in living wages for garment workers and that legislation, strong unions and binding agreements between brands and unions will. The legislation that the Good Clothes, Fair Pay campaign is calling for has the potential to bring about real change the millions of workers producing clothes that are sold on the EU internal market.

The scope covers brands and retailers who want to trade in the EU, independently of whether they are based in the EU or elsewhere. It calls on brands and retailers to put in place, implement, monitor, and publicly disclose a time-bound and target-bound plan to close the gap between actual and living wages.

It puts a particular emphasis on requiring brands to identify risk groups that are particularly hard hit by low wages, such as women and migrant workers. Our proposal includes measures such as the companies’ pricing, costing and overall purchasing practices, ensuring that workers do not have to rely on excessive overtime to meet their basic needs.

This legislation would be the first living wage legislation at the EU level for garment workers worldwide.

Read more about the proposal here.