Marking Human Rights Day: How can legislation help protect the people who make our clothes. 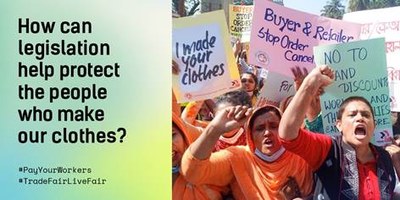 December 10th marks the celebration of Human Rights Day around the globe –a moment to recognise the impact of the Universal Declaration of Human Rights on livelihoods and to affirm the importance of human rights everywhere. In the fashion industry, and during a moment when the global pandemic has upended business-as-usual, it’s more important than ever to fight for the rights of the people working in garment supply chains and demand an end to forced labour.

Severe labour exploitation takes place in fashion supply chains in many forms, from home-based workers lacking social protection to the prevalence of child labour on cotton farms. According to the 2018 Global Slavery Index, garments are the second highest at-risk product category for modern slavery imported into G20 countries. Even where working conditions don’t meet the standard of forced and bonded labour, the vast majority of workers across the fashion supply chain live in poverty, earn far below a living wage, and lack any ability to unionise in order to negotiate their wages or for better working conditions.

Paul Roeland, Transparency Lead at Clean Clothes Campaign, explains: “The current pandemic has shown a terrible light on how unfair the fashion supply chain is. Garment workers need immediate relief – but it also shows that we cannot simply go back to the situation as before. There should be no going back to normal, as the "normal" was deeply flawed. We should use the coming recovery to build fundamentally different, fairer, and more sustainable models for fashion. Both people and planet simply cannot go back to where they were.”

How can legislation improve conditions for the people who make our clothes?

Clean Clothes Campaign and Fashion Revolution have worked alongside more that 65 organisations in publishing the Civil Society European Shadow Strategy for Sustainable Textiles, Garments, Leather and Footwear (TGLF). A shadow strategy is an unofficial policy strategy presented to government officials as recommendations for formal legislation. The shadow strategy calls upon the European Commission, Members of the European Parliament and EU Governments to build and promote a fashion industry that respects human rights, creates decent jobs and adheres to high social and environmental standards throughout the value chain.

When it comes to improving the human rights of garment supply chain workers, the shadow strategy proposes Human Rights Due Diligence Legislation as one of the key recommendations. Fashion Revolution’s Global Policy Director, Sarah Ditty, says: “We expect to see this legislation proposed by the European Commission in 2021, and in the meantime, we will be pushing to ensure that this legislation includes robust and effective access to justice and grievance mechanisms for people working in exploitative and dangerous conditions while making products for big brands.”

This shadow strategy isn’t the only government initiative pushing for human rights in globalised supply chains. Modern Slavery Acts in the UK and Australia and the California Transparency in Supply Chains Act came into force over the last decade in order to address working conditions in global supply chains. Yet, what is lacking is effective implementation and liability for companies that don’t comply. For example, when companies fail to comply with the UK Modern Slavery Act, they receive nothing more than a strongly worded letter. “Governments have let a system and culture of unfair trading practices go unchecked,” says Sarah Ditty. “This has played a huge role in forcing garment workers to remain stuck in poverty-level pay, exploitative, precarious and dangerous working conditions in countries like Bangladesh, Cambodia and even Eastern Europe. The civil society shadow European Strategy for Sustainable Textiles, Garments, Leather and Footwear calls upon the European Commission to put in place measures to end abusive purchasing practices, such as late payments for orders or short-notice order cancellations, which can directly result in human rights violations.”

How do trade regulations impact workers on the ground?

The clothes we buy in store (or online, more recently) are unlikely to have been made in the country where it was purchased. In fact, the average cotton t-shirt is likely to have passed through many countries and many pairs of hands on its journey from raw material into finished product. This globalised value chain means that international trade regulations have a profound impact on workers. The European Union’s system of trade preferences, known as GSP, are meant to ensure respect for civil liberties, freedom of association and other labour standards, set out by the International Labor Organisation, as a necessary condition for countries to import their goods to the EU.

But when goods are made inside of the EU, governments have even more control over working conditions. Paul Roeland says: “The EU should make sure that all Member States set minimum wages that, at minimum, take living costs into account, and should be on a roadmap towards a real living wage. Currently the minimum wages in many Member States are very far away from that. Beyond that, the EU should strengthen the Non-Financial Reporting standards, and provide open and easy access to these reports. This will in turn allow responsible investors to base their decisions on credible, data-based evidence of performance and progress.”

He adds: “Governments and public institutions are also major consumers of garments; think about uniforms for anybody from bus drivers to nurses, work clothing, etc. They should set an example by invoking strong social and environmental criteria as part of their public procurement.”

How can individual citizens support legislation that protects garment workers?

Contact your Member of European Parliament, (you can look yours up here), and let them know that you support and want to see them adopt the recommendations put forward in the civil society shadow European strategy for sustainable textiles, garments, leather and footwear. Tell your MEP (via email, phone call, tweet, or DM) that you want them to do more to improve the working conditions, wages and respect for human rights of the people across the world that make the clothes you wear, both inside and outside the EU.

“In the end, citizens should be confident that the clothes they buy are made while respecting human rights and the environment – and that they have the means to check that out themselves, by making sure they can actually check where, by whom, under what conditions, and with what impact on the planet their clothes were produced.” – Paul Roeland