Workers are going hungry with no food or wages, while employers and brands turn their backs!

In addition to the inordinate conditions under the catastrophic pandemic, Cambodian garment sector workers are being thrown into hunger and deprived of proper medical support during the second wave of COVID-19, which began at the end of February, with strict lockdowns imposed from 15 April. The second wave has hit the garment workers worse than the first, with insufficient safety measures leading factories to become pandemic hotspots. Workers from more than 206 factories, most of them women, have been infected by COVID-19, and about 17,000 workers are quarantined. They are being neglected by the government, the employer association (GMAC) and the brands for whom they produce the clothes and shoes for!

Workers in need of food and medical support

Most of the garment workers live in Phnom Penh and Kandal province, which are labelled red zone areas. Here, they are the major victims of this humanitarian crisis.  Red-zone area residents are prohibited to leave their homes, even to buy basic amenities. The markets and street vendor shops that are accessible to workers for their daily survival at a low cost are also shut down. Hence, workers in these areas have no means to access their daily living amenities, including food and water.

Amnesty International reports that despite the urgent need for aid, several humanitarian NGOs are barred from distributing food or other essential items in the most affected areas. The report also conveys a discriminative, inadequate and politicised food distribution and essential services during the mismanaged lockdown in Cambodia. In sum, these practices hamper the human rights of the residents in lockdown areas.

No wages during the lockdown!

The trade union leaders, as well as the media, report that garment workers are pushed into extreme levels of poverty and hunger, as employers have been refusing to pay workers due wages since the start of the current lockdown period. As per the updates from CCC Network, and also confirmed by GMAC, garment workers living in Phnom Penh and Kandal province will be paid only 50% of their April wage, since they were not working during lockdown.

Risk to Health and Safety

Media also reports that trade unions have raised their concerns through a joint statement about the higher health and safety risks at the factories when workers return to work. Trade union leaders complain that workers who are allowed to go to work  from the less restricted light-yellow zones are not provided with proper safety measures at their workplaces or during the commute to the factories, putting them at risk again.

The study "Cambodia's Garment Sector in Transformation" shows that since the beginning of the pandemic, brands failed to ensure Human Rights Due Diligence, instead engaging in the irresponsible disengagement of business contracts with suppliers, demanding discount prices for orders, and even delaying payments.  Though the unions C.CWAWDU, CATU, and many more wrote letters to brands asking them to assure the payment of minimum wages, until now, there has been no proper commitment from the side of brands assuring the payment of legally mandated wages.

Now, in addition to that, unions strive again for the payment of wages during the lockdown period. 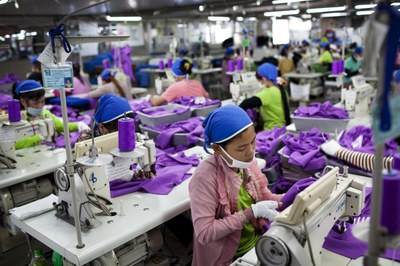