Brands are weathering the pandemic. Garment workers are not

As researchers and advocates working to improve labor rights in the garment industry, we are used to heartbreaking stories. But what we are seeing during the pandemic is a new level of despair among workers, as widespread loss of jobs and income robs them of the ability to feed their families.

The dire situation in which millions of workers find themselves is the product of poverty wages across the supply chains of global brands, which left most workers with no savings despite years of labor, and the ruthlessness of brands’ response to the crisis.

Wages are shamefully low in the industry. The minimum wage in Bangladesh, the second largest global apparel producer, is less than 100 dollars a month (less than 50 cents an hour). In Ethiopia, an up-and-comer among producing countries, there is no minimum wage at all. On average, garment workers around the world make less than a third of what it takes to support a family’s basic needs. That is why, on the eve of the crisis, most garment workers not only lacked any savings, but were in debt, having borrowed money to buy the necessities their meager earnings cannot.

When the pandemic hit, brands immediately reneged on billions of dollars in financial obligations to suppliers, refusing to pay for goods workers had spent months producing and pocketing the money instead. The brands’ actions forced many suppliers into bankruptcy and millions of workers into destitution. Brands jettisoned decades of pretense about “social responsibility” with breathtaking speed.

Pressure from labor rights advocates forced some brands to reverse course and pay their bills, but they often did so slowly and many still refuse. An analysis of US and EU trade data by the Center for Global Workers’ Rights (CGWR) at Penn State University and the Worker Rights Consortium (WRC) found a $16 billion drop in apparel imports in spring of 2020 relative to 2019, resulting primarily from brands’ failure to take delivery on goods they asked suppliers to make. The Clean Clothes Campaign (CCC) has estimated that garment workers globally lost at least three billion dollars in income in the first three months of the pandemic.

Research published this month by the WRC on garment workers’ access to nutrition illuminates the human impact of brands’ recklessness: 80% of garment workers with children are now skipping meals to feed their kids. A Bangladeshi worker who made clothes for Mango and Primark said, “Before the pandemic, I bought fruit for my child regularly. [Today] I cannot buy even fish or meat. Egg is a luxurious food for us now.”

Brands’ efforts to push the economic pain of the pandemic down the supply chain didn’t end with the refusal to pay their bills; now they are taking advantage of the leverage that declining global demand gives them over suppliers to extract price concessions on new orders. A survey of garment suppliers by CGWR found brands demanding an average 12% price cut on like products relative to a year ago. Many suppliers say the present price squeeze will force them to shed more workers.

With workers across their supply chains struggling to feed their families, and with their own sourcing practices partly responsible, apparel brands should be taking steps to help workers survive. They have the resources. Most major brands are weathering the crisis in reasonably strong financial shape and some, including mass retailers like Amazon, Target, and Walmart, which are earning record profits. Indeed, after years of rhetoric from brands about “sustainability” and “ethical sourcing,” a failure to aid workers now would reveal not just heartlessness, but hypocrisy.

Yet, brands have done little or nothing to help workers. Some brands point to initiatives ostensibly designed to mobilize resources, but the output of these projects ranges from anemic to nonexistent. A garment industry “Call to Action” involving some leading brands has generated pledges of only a few million dollars for workers in a small set of countries, a minuscule fraction of the need. The money comes from public institutions; the brands have paid nothing. And, nine months into the crisis, no money has actually been distributed. The biggest beneficiaries: workers in Bangladesh who may get an average of $40 each in the coming weeks. That woeful track record is actually superior to that of a “memorandum of understanding” involving mostly US retailers, which hasn’t produced a penny. An industry trade publication offered the following verdict: “These initiatives are not helping anybody, except brands for which they provide cheap PR.”

If brands don’t step up to help stanch the human damage the pandemic, and their own practices, are doing across the globe, the suffering will be enormous. And immediate assistance, while essential, is not enough. Garment workers should never again be left in such extreme vulnerability. Fundamental reform of supply chains is required. The brands can begin with a proposal, already on the table, under which they would pay a small price premium to fund unemployment protection for workers.

The WRC and CCC estimate that it would cost apparel brands less than ten cents on a t-shirt to provide the economic relief garment workers need to survive the crisis and to strengthen unemployment protection in the future. Any brand CEO that won’t authorize that expenditure should hang their head in shame. 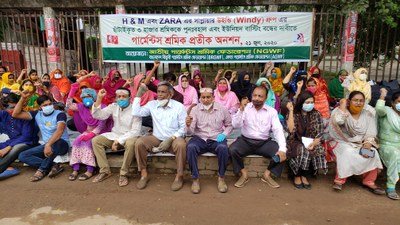