Big brands have mistreated their workers throughout the COVID-19 crisis

Stark figures from the Clean Clothes Campaign show that garment workers are owed between 2.42 and 4.38 billion GBP in unpaid wages from the first three months of the Covid-19 pandemic alone. During a global pandemic, the knee-jerk reaction from major international brands was to set in place a series of processes to protect their profits, whilst pushing the costs onto those who can least afford it, garment workers at the bottom of their supply chains. Brands cancelled orders, delayed payments and enforced discounts on suppliers – all of which is leading to a humanitarian crisis for workers who were already only earning poverty wages.

Primark was one of the big brands who initially cancelled all existing orders as lockdowns were enforced across Europe. After intense pressure from campaigners, Primark announced a wage fund to cover the wage component of cancelled orders. This fell short of demands from labour rights groups. Primark offered no insight into how the wage fund had been calculated, or how it would be administered to ensure that workers were paid. It only covered seven countries, leaving out major production countries including Turkey and China.

Primark’s scheme failed to meeting its basic duty to honour the orders it had placed. A month’s salary is little consolation for a garment worker who loses her job because the factory she works at has been pushed into insolvency. After many months of campaigning, Primark eventually agreed to pay for existing orders. However, questions remain over whether workers in its supply chain have been paid their legally owed wages.

Workers in Primark’s supply chain have been protesting in Bangladesh, Myanmar and Cambodia over unpaid wages, reduction in pay and mass dismissal. In Bangladesh, one of Primark’s suppliers which usually employs 6000 people, currently only has 500 people working whilst the rest are on unpaid ‘holiday’.  In Myanmar, another Primark supplier closed its factory in May, resulting in 2000 workers losing their jobs and receiving only partial compensation.

In a market where brands often function as de facto employers, dictating prices and terms, many factories operate on minimal margins and simply do not have the funds to pay workers, especially after the huge disruption of cancelled orders and delayed payments. As primary profit-makers in the supply chains, brands must now step up and ensure that workers are paid.

Let’s not forget that brands consistently choose profit over the wellbeing and dignity of the people who make their clothes. Whilst Primark’s Code of Conduct specifies that all  workers in its supply chain should be paid a living wage, research available on the Fashion Checker website shows no evidence that workers making Primark’s clothes receive such a wage.

The Covid-19 crises exacerbated the wage crisis in the garment industry, but it has not created it. For decades, brands have profited from supply chains which accrue wealth at the top, whilst systematically underpaying workers who make their clothes; the vast majority of whom are women of colour.  Brands have a track record chasing production in countries which offer cheap labour and no social protection. In the process, they incentivise governments to compete for business by eroding workers’ protections and keeping wages low.

Labour Behind the Label is calling on all brands to commit to paying workers their full wages during the pandemic and beyond. Brands are collectively responsible for structural inequalities in supply chains and as such they should work together to establish funds and take out loans if necessary to cover workers’ wages. However, we are also calling on individual brands like Primark to make a public commitment to ensure their workers are paid. If Primark is confident that their wage fund has been successfully implemented, why would they hesitate to make such a commitment?

Ensuring workers are paid is of paramount importance to Primark and COVID-19 has not in any way altered our commitment to this principle. To support our suppliers in their ability to pay workers during the pandemic we set up a fund to make sure workers were paid as soon as possible for Primark product in production. When our stores were able to reopen we committed to pay in full for all garments both finished and in production as well as any finished fabric costs incurred for Primark prior to the stores closing in March. This ensures that our suppliers can pay the wages for work done on Primark product.

Since stores reopened in July, we have also been able to place £1.25bn of orders for autumn/winter, a significant investment into the supply chain. As of today, more than half our stores are closed again due to the pandemic. We will honour all current orders placed with our suppliers.

We are committed to playing our part in protecting the jobs of millions who work in the supply chain, which is why we are actively involved in the ILO-led Global Call To Action.

Meg Lewis, Labour Behind the Label for Thomson Reuters Foundation 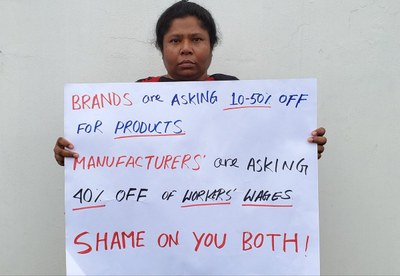